It's no secret I have the BIGGEST sweet tooth ever...so, I am always on the hunt for new paleo desserts that I can make to satisfy that sweet tooth! These donuts do just the trick. They're made with all the clean ingredients that keep my body functioning at its best but also taste so dang good. I've been missing having donuts, so it was about time I made some paleo-friendly ones. Enjoy! 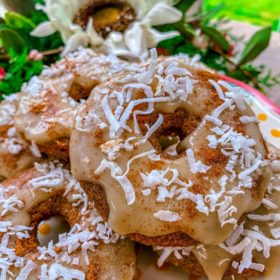 These paleo pumpkin donuts are not only packed with clean and gut-friendly ingredients but also taste like a cinnamon-pumpkin party in your mouth. They're an easy and delicious treat everyone is sure to love!
Print Recipe Pin Recipe
Prep Time 10 mins
Cook Time 20 mins
Total Time 30 mins
Course Breakfast, Dessert, Donut, Snack
Servings 6 Donuts